Norwich City edged closer to winning promotion back into the Premier League at the first time of asking, as they beat struggling Derby County 1-0 on Saturday. Kieran Dowell scored the only goal of the game with a stunning free-kick, which left Derby goalkeeper David Marshall with no chance.

Norwich had the better of the chances on the day, and will be pleased to pick up another win to show for their efforts at the weekend.

The Canaries remain top of the Championship table, and are eight points clear of second-placed Watford heading into their final five matches of this years campaign.

But more importantly, Norwich are 17 points clear of third-placed Brentford in the second-tier standings, with the Bees needing to pick up points in their game in hand to stop the Canaries from clinching promotion back into the Premier League.

One player that has played a starring role in their promotion bid is Emi Buendia, with the Argentine scoring 12 goals, and being on hand to provide 16 assists from his 36 appearances in all competitions this term.

Buendia took to Instagram after the win over Derby County, and labelled it as a massive win, before turning his attention to their next match.

Buendia and his Norwich City team-mates are set to return to action next weekend, when they take on promotion-chasing rivals AFC Bournemouth at Carrow Road.

Are these facts about Norwich City’s badge true or false?

It certainly was a massive win!

Norwich might not have been at their best on the day against Derby County, but htey did enough to get the job done and pick up three important points.

The Canaries have really impressed me this season, and it would be one of the biggest shocks in recent years if they were to miss out on promotion, especially given their strong position in the Championship at this moment in time.

Buendia has played his part in that bid for promotion as well, and itll be interesting to see whether Daniel Farke can keep him at the club ahead of the 2021/22 season.

One Last Championship Hurrah But Norwich Need A New Striker

Another calm performance and clean sheet for Andrew Omobamidele 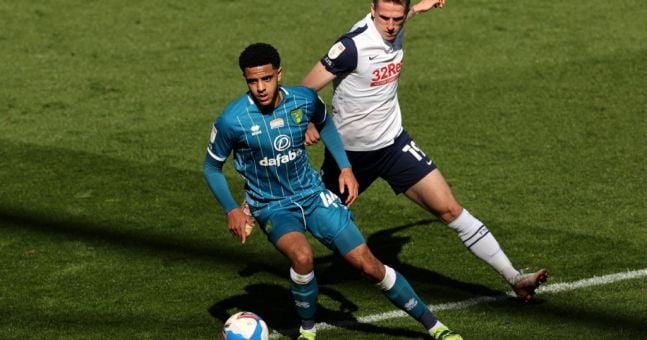