Derby County (A) – The ACN Review

So very close to it all being official, Norwich City are all but confirmed to be in the top flight next season. This wasn’t the comfortable victory many were expecting though, here’s Matthew McGregor to talk you through it…… 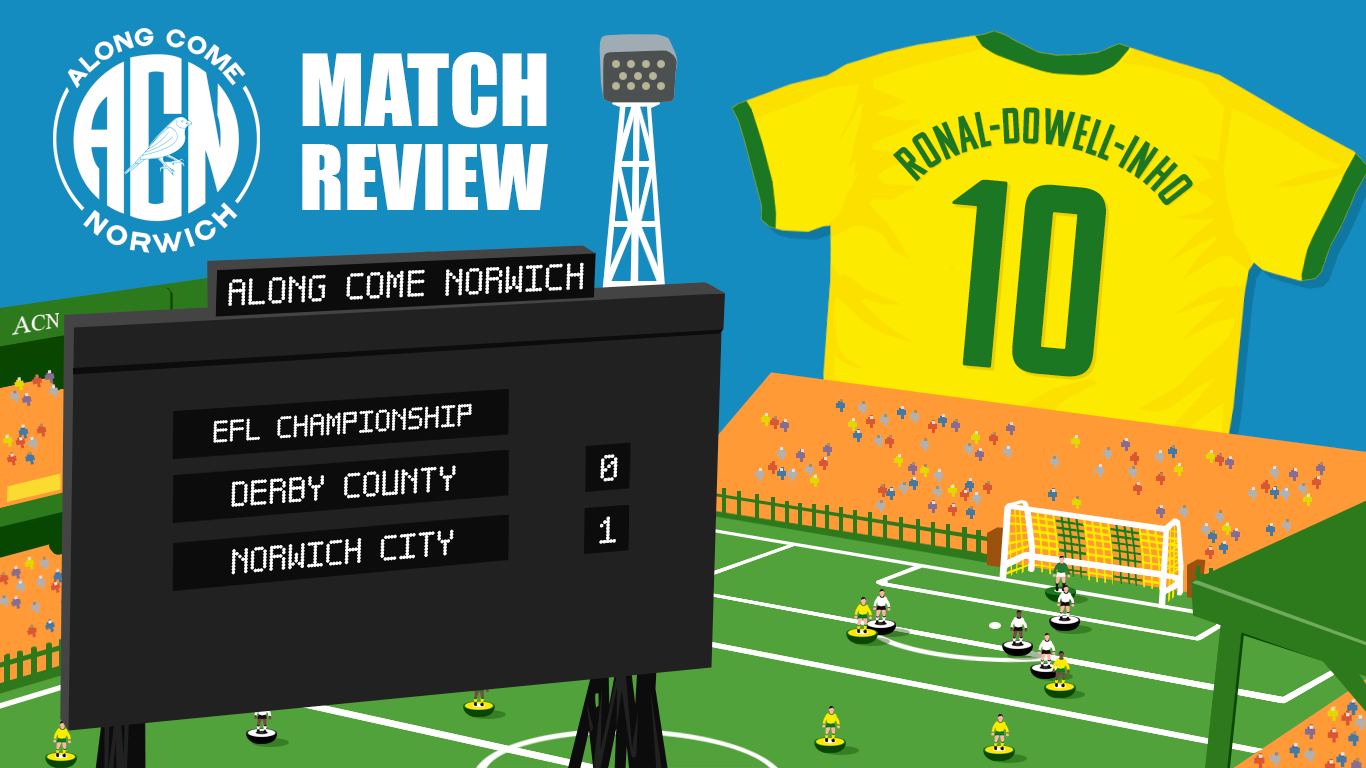 We have reached 90 points, and were all but certain to be back in the Premier League next season readier than a year ago, stronger and more seasoned. The fact that Brentford and Swansea both won meant the mathematical certainty threshold wasnt crossed and that gave this win a slightly routine, anticlimactic feel. The fact that extending our unbeaten run to 13 felt routine is in itself a big positive.

I agreed to do this review after being assured by ACNs editor-in-chief that Norwich wojld win promotion at Pride Park. Everything seemed aligned, especially after the high of Tuesdays win, so I excitedly agreed, giddy at the prospect of waxing lyrical about the confirmation of our Premier League status. In the end it was very much a case of along come Along Come Norwich.

Moment of the Match

Andrew, fucking speak. So said Max Aarons to Omobamidele midway through the second half, according to Michael Bailey. Derby had finally got into the game, and we were under some semblance of pressure. As has happened so often this season, the back four weathered the storm just fine.

Derby have only scored five more goals than Teemu Pukki this season, but even so our defence has been in a different class recently, and this was the case for long stretches of the match.

At the heart of our defence today, and the season, was Hanley. He was absolutely everywhere. Lots of people can stake a claim to the triumph of 18 clean sheets (and counting) but Hanley is right up there and should be comfortably top three for player of the season.

If youre anything like me and love nothing more than an angry and animated Daniel Farke, the rough patch in the second half was a treat. He seems to be personally offended by slack play, as if the players sloppiness can only be explained by an attempt to troll him. Yes the City View videos the club does of goals from behind the goal are fantastic, but how amazing would a pitch side camera on Farke be during rants like this?

Kieran Dowells free kick will get the headlines of course, but his play generally is now at a level where his place shouldnt be in doubt even if everyone was fit. And given just how rough he was at the start of the season, he has staked a claim on most improved player. The free kick as exquisite as anything Ian Crook would have managed in his heyday also gives us a weapon weve been missing since Mario lost his place.

That wasnt the victory lap win we hoped for. It was a routine win in the style of so many this season. We did enough without needing to move through the gears. We had periods of beautiful, threatening play, and periods of sloppiness which needed our robust defence to stand firm. But it was routine. Norwich might as well be playing in slippers they look so comfortable according to commentators at one point. We are masters of the Championship now. We should enjoy these next five games, because next season isnt going to be anything like this one.