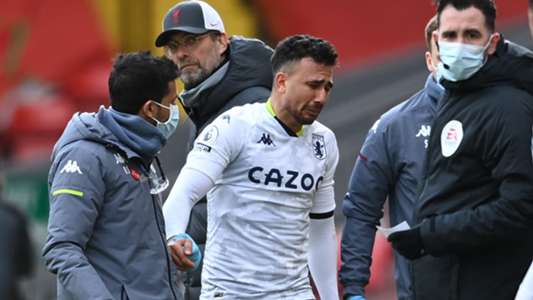 Trezeguet picked up an injury in Villas 2-1 Premier League loss to Liverpool on Saturday with Salah on target for the hosts at Anfield.

Towards the end of the encounter, the Egyptian winger went down following a tackle from match-winner Trent Alexander-Arnold which made him leave the field in tears.

Trezeguet, in a social media update, said he is yet to confirm the severity of the injury as he awaits his medical scan.

“Thank you all for your support, I appreciate your concern. Actually, I’m not quite sure about my injury,” he wrote on Instagram.

However, his compatriots including Salah, Ahmed Hegazi and Ahmed Elmohamady alongside several African teammates have sent best wishes to the former Kasimpasa player.

After the match, manager Dean Smith expressed his worry about the latest injury blow to the 26-year-old who scored a brace in their 3-1 win over Fulham last week.

Trezeguet has played 21 league matches so far this season because of a head injury which ruled him out of action between December and January, and it is unknown yet if he will return to action before the end of the 2020-21.

He certainly has (found form). He came on as a substitute and made an impact last week, scoring twice against Fulham, Smith was quoted by Birmingham Live .

He played well again today and played his part but unfortunately hes gone off injured. Were a little bit worried to see what the extent of the injury is.

Hes a little bit upset but well see over time.