Ipswich Town drew 0-0 with MK Dons in the first game of a new era at Portman Road. Andy Warren looks at some of the talking points surrounding the game.

This was a momentous day for Ipswich Town as a new era began at Portman Road under American ownership.

But for so many reasons it wasnt the occasion it really should have been.

On the pitch, even if the performance was slightly better than Mondays miserable goalless draw at Rochdale, this was still pretty drab. Another game with no shot on target, meaning its now 215 minutes since the Blues last tested the goalkeeper, including the final 35 minutes of the victory over Bristol Rovers.

Off it, imagine how vibrant the Portman Road stands would have been had supporters been inside the ground. How many American flags would there have been? How many fans would have attended having avoided visiting the stadium during the miserable end to Paul Lamberts reign?

In reality, there wasn’t a star-spangled banner in sight and the only thing hinting of an American takeover was a few USA-themed songs on the pre-match playlist.

Weve been robbed of so many big moments at Portman Road this season. A season opener, celebrating the dramatic 97th-minute victory over Shrewsbury, a vocal end to Lamberts time and a joyous welcome for Paul Cook.

But the emotion coming from long-suffering fans on the first day of the American era would surely have topped the lot.

New chairman Mike OLeary was in the stands while the new American owners, including money-man Mike Schwartz from investment group ORG, are all understood to have watched on iFollow, having had their VIP account created a few hours earlier.

The Town performance led many to wonder whether the new owners had kept their receipt following their purchase from Marcus Evans.

Thankfully they knew what they were buying into and are ready for the challenge ahead.

On the subject of Evans, he may not have been at the game following his sale of the club but his presence was still felt at Portman Road.

The Marcus Evans Group logo is still hanging on the back of all-four stands and on advertising boards around the ground, including on both sides of the scoreboard. It remains to be seen how quickly they will be removed.

Theres every chance he was watching at home. That will have been a strange experience for him.

He still owns a stake in the club, more than any of Brett Johnson, Berke Bakay or Mark Detmer as individuals, but his input is likely to be minimal from this point.

The stage was set for someone to write themselves in history as being the first man to score for the Blues under their new ownership. Were still waiting.

This is exactly what happened at the start of the Evans-era in 2007, though, with his first game ending in a 0-0 draw with Burnley.

As it happened, Town drew a blank in Evans second game too, at Leicester, before Danny Haynes finally scored an era-opening goal in defeat at Coventry.

The first win finally came in game four as David Wright, who was at yesterdays game scouting for Norwich, and Jason De Vos secured a 2-0 win over West Brom.

If this incarnation of Ipswich Town have to wait until game four of the American era, which comes at Northampton, for a first win then any lingering play-off hopes will surely be over.

Players and officials observe a two minutes silence for Prince Philip ahead of the game. – Credit: Steve Waller-www.stephenwaller.c

Before kick-off, there was a two-minute silence in tribute to Prince Philip, the Duke of Edinburgh, following his death on Friday.

The union flag on the roof of the Cobbold Stand was at half-mast and the players all wore black armbands, with a league-wide message read out before the two-minutes of silence.

As a further mark of respect, the kick-off time for next Saturdays visit to Charlton will be moved in order to avoid clashing with his funeral. More details on that soon.

Charlie Brown was part of the Ipswich Town youth system and is now at MK Dons – Credit: Ross Halls

Charlie Brown will have dreamed of making his first senior appearance at Portman Road for many years.

What he wouldnt have imagined, though, is that it would come in empty stadium and that he would be wearing an MK Dons shirt.

Brown departed the Ipswich academy in 2016 for Chelsea, where he proceeded to score goals by the bucketful in both Premier League 2 and the UEFA Youth League.

There was no first-team breakthrough, though, and he joined the Dons on a permanent deal in January. He has two goals in 15 appearances so far.

Many in blue will be watching his career with interest.

Brown came on for the final 20 minutes of this game, replacing Will Grigg.

For the record, can we just make it clear Will Grigg is not currently on fire, with his record of six goals in his last 60 games nothing special at all.

He was a cult hero during Euro 2016 in France, having scored 29 for Wigan during the previous season, and recaptured that form under Town boss Cook in 2017/18 as he netted 26 times as the Latics won League One.

Its been tough for the 29-year-old since, to the extent hes currently on loan at Dons from Sunderland, having flopped at the Stadium of Light following a big money move.

Theres every chance he will be linked with a move to Ipswich, and a reunion with Cook, on several occasions over the coming months. In fact, he already has, by an outlet with a very patchy track record. Well see how that one pans out.

Tristan Nydam bumps fists with the officials, after his first game back in the first team after an absence of two years. – Credit: Steve Waller-www.stephenwaller.c

It was great to see Tristan Nydam back on the pitch after three extremely difficult years.

His 20 appearances in Mick McCarthys final season saw him jump from relative obscurity to being a serious first-team prospect at Town, before a miserable loan at St Johnstone and a really bad ankle break saw his career stall for 36 months.

But now hes back and gave an excellent account of himself and, while patience will be needed, suggesting hes still the same player we enjoyed watching so much in 2017/18.

Garner: Im ready and looking forward to taking on the challenge

One disappointment is that Andre Dozzell exited the game as Nydam entered on Saturday, meaning weve still not seen all four young men from the below picture on the pitch for the Blues at the same time in competitive action.

Hopefully it happens soon because, on the day it was taken ahead of a pre-season friendly with West Ham, it looked as though they could form the future core of a Town first-team.

Flynn Downes, Luke Woolfenden, Andre Dozzell and Tristan Nydam have not yet been on the field for a competitive game at the same time – Credit: Picture: Steve Waller

Nydam: It's Good to Be Back 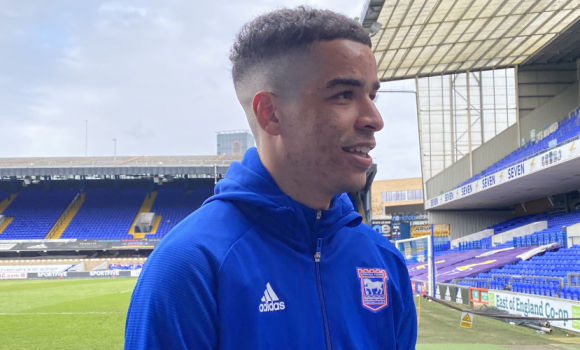