This performance was better than what weve seen of late.

Mind you, thats not saying a lot.

The bar has been set so low, were often left clutching at straws when looking for the positives.

Town started with a good energy and intent. With Paul Cook barking from the sidelines, they pressed high, hunted in packs and didnt allow MK Dons to settle.

For whatever reason though, whether its fitness or belief, that never seems to last.

As the tempo dropped, the Dons started to see more and more of the ball. Cook, increasingly frustrated, was trying to move his players around the pitch via verbal instructions as if he were playing a computer game.

MK Dons spurned a big chance in the 41st minute when Scott Fraser fired into the side-netting following Toto Nsialas important block on Will Grigg.

Aaron Drinan just fails to get on the end of an Andre Dozzell cross. – Credit: Steve Waller-www.stephenwaller.c

Ipswich then missed a big chance of their own in the 44th minute when Dobra, sliding in at the near post, stabbed Gwion Edwards sweeping cross just the wrong side of the upright.

After the break, Tomas Holy made a fine full-stretch save from Andrew Surman after a short free-kick routine. The big Czech also did well to make a double block from Matt ORiley at the near post.

Town then finished the stronger and MK Dons, with nothing left to play for this season, looked there for the taking.

Ipswich forced plenty of defensive errors, but just didnt have the calmness or quality to punish them. The words huff and puff once again spring to mind.

Andre Dozzells corner deliveries either went straight into the keepers hands or failed to beat the first man.

When Drinan raced into the box he delayed too long before being shepherded away from goal.

A decent Flynn Downes pass led to Freddie Sears fizzing a shot just over the angle of bar and post after jinking inside.

Sears then fluffed the best chance when lobbing the ball the wrong side of the post when keeper Andrew Fisher was caught in no mans land.

All in all, a draw was probably about right.

And draws arent good enough as the games quickly run out.

That now leaves just two teams Bristol Rovers and Northampton with fewer goals than Town in League One this season.

This was a third goalless draw in four matches.

Its now more than three hours of game time since the Blues have produced a shot on target.

That probably shouldnt have come as a surprise.

The 10 outfield players who started this game have just 13 league goals between them this season from a combined 208 starts.

From October 31 onwards, that total drops to just three goals from a combined 157 starts (Drinan at Crewe on Jan 30, Woolfenden v Blackpool on Feb 6 and Chambers v Gillingham on Mar 6).

Own goal has netted more in that period.

Those are pretty sorry statistics.

Cook prides himself on sticking with the same system and being consistent with his selection of personnel.

Those principles have had to go out the window during his first few weeks as Blues boss though.

He is trying everything in the search for a winning formula.

The Liverpudlian reluctantly abandoned his long-favoured 4-2-3-1 formation after an underwhelming first six games in charge.

Town manager Paul Cook gives instructions to Freddie Sears ahead bringing him on in the second half. – Credit: Steve Waller-www.stephenwaller.c

In the Easter weekend games against Bristol Rovers and Rochdale he started with 3-5-2 before switching to 4-4-2 within the 90 minutes.

In game nine, he started with a 4-4-1-1 – Dobra playing just off of Aaron Drinan (those two having impressed in a 4-2 win against Bristol City earlier in the week).

That meant Dozzell playing out of position wide left.

Come the 70th minute, Cook tried something else switching to a diamond midfield (Troy Parrott at the tip, Tristan Nydam and Alan Judge wide, with Downes at the base).

Striker Oli Hawkins was thrown on in the 88th minute as the Blues boss, once again, used all five substitutes in the search for an attacking spark.

Whatever he tries though hes not finding one.

Garner: Im ready and looking forward to taking on the challenge

Just four weeks on from suffering a grade two hamstring strain, Flynn Downes was back in the Town starting XI.

And the 22-year-old produced a display that reminded everyone just how much hes been missed during an injury-hit campaign.

He hassled and harried, showed good strength and aggression, had more touches of the ball (64) than any of his team-mates and produced some key forward passes.

No doubt about it, Downes has been a key missing ingredient this season. Hes a player to build the team around next season.

The big, big positive from this game was the return of Tristan Nydam.

Exactly two years to the day since his last competitive appearance, the 21-year-old stepped off the bench just after the hour mark.

Its been a long road to recovery for the former England U19 international since that horror ankle break in a pre-season friendly at Notts County in the summer of 2019.

Just to get back on the pitch was an achievement, so to perform the way he did was even more impressive.

Playing wide left he was arguably Towns best player over the final half hour. He pressed high, tracked back and will have left Cook with plenty of food for thought for the games ahead. 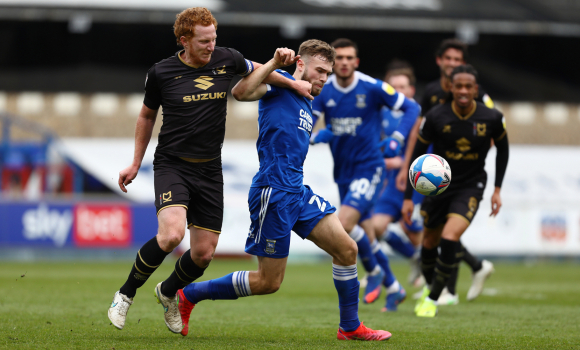