Last updated on .From the section Derby 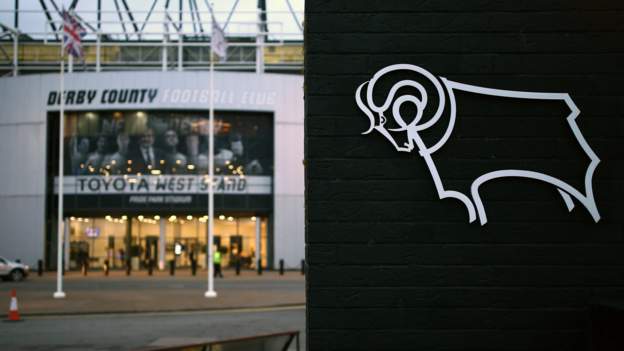 Derby are 20th in the Championship, seven points clear of the relegation zone

Prospective new Derby County owner Erik Alonso says his “eventual goal” is to take the club to the Champions League.

The Spanish businessman, 29, last week agreed to buy the Championship side from chairman Mel Morris.

Alonso, who previously had a short period working as an adviser at Sheffield Wednesday, has also given his backing to Rams manager Wayne Rooney.

“My goal is to make Derby big again and get back to the Premier League as soon as possible,” he told BBC Radio Derby.

“The eventual goal is the Champions League. I dream big.

“I will not bring [Lionel] Messi or Cristiano [Ronaldo] but we have to get a good squad. For sure we will make a squad to fight to get promoted back to the Premier League.”

A protracted takeover of the Rams by Derventio Holdings was called off last month by Morris, who took over at Pride Park in 2015.

The deal with Alonso’s No Limits Sports Limited company remains subject to the Football League’s owners and directors’ test.

“Wayne Rooney was a legend as a player. Now he’s doing very well as a coach and he will have all the support from me,” Alonso said.

“I have already spoken to him, I said let’s focus on staying in the league and then we can talk about next season.”